Alcatraz prison tour for a day 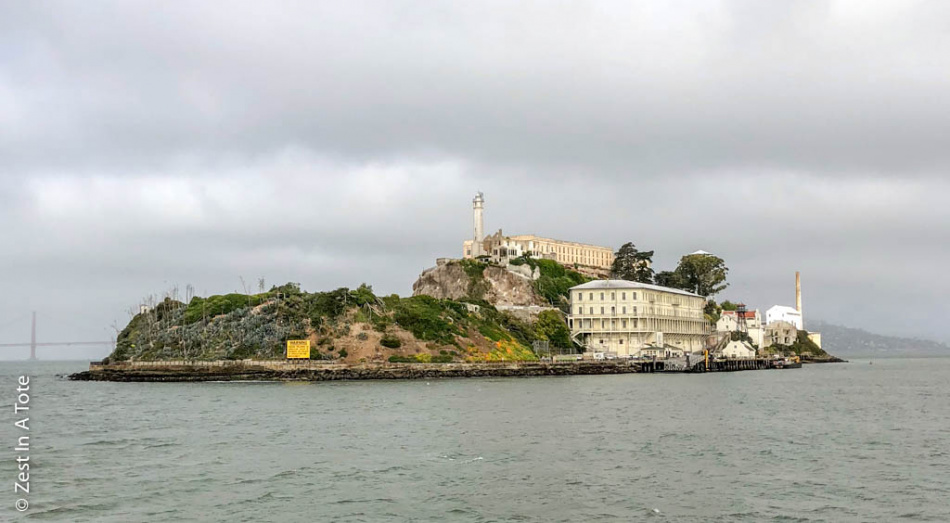 Hello darlings. Let me bring you to an Alcatraz prison tour for a day, will you? What's that? Weird choice for a day trip, you say? Well, do you remember how you spent New Years eve of 2000? I bet you were on a wild party to welcome the new Millennium didn't you? Wanna know how I spent it? Watching The Rock along with my sister on the TV for the 5th time! That small family trivia was just to show you how thrilled I was when Shweta from the Zest in a tote blog pitched me the idea of writing an article about Alcatraz aka the Rock. So, now will you let me take you to an Alcatraz prison tour for a day?

Alcatraz prison tour for a day

You see this island from the San Francisco bay, approximately a mile away from the shore and visible from the oceanfront. A maximum security prison for America’s notorious criminals made famous by the movie ‘The Rock’. So is a visit to Alcatraz Prison island worth the time and effort? I certainly think so. It was a memorable experience in our 4 days in San Francisco. But you make up your mind after reading more.

Once home to some of America’s most notorious criminals, the federal penitentiary on Alcatraz Island was operated from 1934 to 1963. The presence of infamous inmates, like Al “Scarface” Capone and the “Birdman” Robert Stroud, helped to establish the Island’s notoriety.

Although I knew about the island being home to a prison, I learnt on the Tour that it was also the site of the first American lighthouse on the West Coast. Following the closing of the penitentiary, Alcatraz also became the site of an American Indian protest movement that would change modern American history.

We had booked the tickets to Alcatraz island online. These get sold out quickly especially, so make sure you book yours 2-3 months in advance. For our dates in early June, the night tour had already got sold out 2 months in advance, but there were plenty of day trip options left.

All Alcatraz Island tours depart from and return to Pier 33 Alcatraz Landing, located along San Francisco’s northern waterfront promenade. We reached the Pier a bit late and were just in time to board the ferry. It wasn’t too crowded for the first tour of the day at 845 am.

It is a short ferry ride and soon the island came in view. This was the ‘inescapable’ prison I was looking at - no ‘known’ successful escape has been made from this prison island though several had been attempted.

Once we disembarked, there was a brief introduction and we were asked to climb the road to the top. We got our audio tour sets (they are available in several International languages) and were excited to start the tour.

This has to be one of the best recorded audio tours I have experienced. Lucid, with information delivered in a crisp and engaging way, the drama of the Battle of Alcatraz and another escape attempt comes through clearly, the audio instruction direct you to various sections of the prison in a structured way so that even with the crowds, your experience doesn’t get diluted.

Life at the Prison

As a prison, Alcatraz was designed to serve as America’s first maximum-security, minimum-privilege penitentiary. Alcatraz was sometimes called the “prison within the prison system”, since the only inmates sent there were transferred from other federal prisons. Courts could not sentence anyone to Alcatraz. Instead, “The Rock” was where the most troublesome prisoners were sent until it was decided they could be safely returned to a lower-security institution.

After collecting the audio guides, you first come upon the room where new prisoners would come, collect their prison clothes which they would put on after taking a shower. You see the rows and rows of cells across corridors and get a feel of what life for inmates here would have been like.

We saw the recreation yard, the prison library, the activities that inmates did to kill time. From various parts of the prison, you could glimpse at the world beyond and it would drive home the point that the prisoners had lost the most precious thing in life, freedom!

During the period the Federal penitentiary operated, 36 prisoners were involved in 14 separate escape attempts. 23 men were caught, 6 were shot and killed, and 2 drowned. 5 convicts disappeared and were never seen again, but the overwhelming odds are that they drowned and that their bodies were never recovered.

One of the most engaging sections of the audio tour is the description of the ‘Battle of Alcatraz’. This violent escape attempt occurred in 1946. A bank robber devised a forceful escape attempt with 5 accomplices. This prisoner used a crudely fashioned bar-spreader device to exit from his cell and overcome an unsuspecting prison guard. The 6 prisoners were then able to get hold of guns, capture 9 unarmed guards but were unable to locate the key to the recreation yard that would ultimately foil their escape strategy. The key had been hidden carefully by a brave prison officer.

When the breakout was discovered, the sirens at Alcatraz Prison could be heard from the shores of San Francisco. The Coast Guard and the Marines mobilised a force quickly to take control of the Prison back from desperate convicts. But not before 2 officers died and 14 guards and many prisoners were injured.

There is a small souvenir store at the end of the Tour. You could pick a T-shirt or a mug / plate (the same shape as used by prisoners) and several other items from here. Please carry your own water and snacks as needed to the island.

Shweta has always been passionate about travel and immersing in new experiences. Having been to over 40 countries, she blogs at Zest In A Tote to bring family-friendly itineraries and tips, destinations, and luxury stays to her readers. Her belief in family travel needn't be boring and one can do a mix of local culture & food, adventure activities and relaxation, all with family. Connect with Shweta on Facebook, Instagram or Twitter.

This is the second post of my travel guest posts on the Americas. You can also read my Jacksonville, Florida two day itinerary.

So how did you like our Alcatraz prison tour for a day? Is this something you'd like to do or would it creep you out? I am all in for a visit!!!